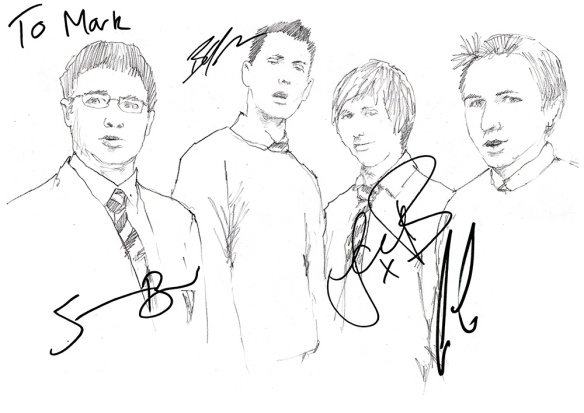 The boys are back for their final instalment. The Inbetweeners 2 movie had its London Premiere at the Vue Cinema yesterday and the Rudge Park Comprehensive quartet of Will, Simon, Jay and Neil all attended masquerading as actors Simon Bird, Joe Thomas, James Buckley and Blake Harrison. After the award winning TV series and the first movie in 2011 the lads have reached cult status.

The quickest of quick sketches just to capture their likeness. It was a last minute decision to attend with half and hour to draw, race to the train, (which was cancelled), get the re-scheduled service which chugged into town. Made it to a public pen near the drop off point, six rows deep, thinking this is not a good idea. Getting one siggy, let alone four, looked like mission impossible. Minutes later a big black car arrives and all four slip out, doing the obligatory group photo, then move around the line. Blake slipped past first, and if it wasn’t for Robert (a fellow grapher) grabbing my sketch and hurtling himself to the front, accompanied by a shrill, “Blake Blake Blake!” I would have missed. A young guy in front of me wanted to high five them, so I said to him, “As you do that could you also point to this sketch,” which I conveniently held up next to him. It worked and I got all four – Simon even dedicated. Mission accomplished.